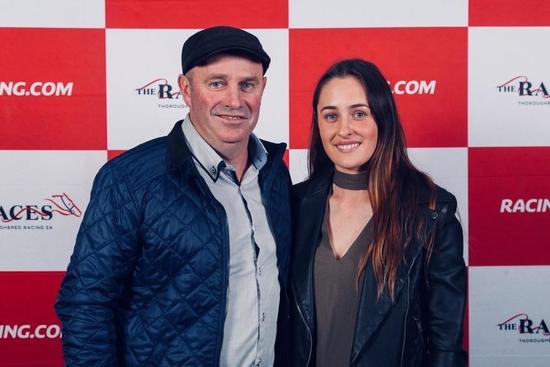 Richard Jolly was proud to announce that from the 17th of September 2018 his daughter Chantelle was joining him in partnership as co-trainer.

Chantelle has worked for the stable full-time since finishing school in 2014, whilst also studying a Bachelor of Business at university.  She acquired her own trainers license in 2015, becoming one of the youngest female trainers in Australia, and trained her first winner at 19 years of age.  Early in 2018 she spent three months in the UK working for top trainer Ralph Beckett, who trains around 150 horses.  She loved her time away and the knowledge and experience she gained was invaluable.

Richard enjoyed a distinguished career in Adelaide as a successful jockey for over 14 years winning over 800 races with many group and listed races. During that time he tasted Group 1 success by riding the winner of the Perth Cup on a horse called Saratov and later rode it in the Melbourne Cup. Richard was always amongst the upper echelon of riders in South Australia.

Richard started training horses in August 2000. Since this time Richard has had a great deal of success finishing consistently in the top group of trainers from year to year, a real achievement in such a competitive industry.

Richard is a horse trainer who rides his own horses in track work, a task from which he derives much pleasure and inside knowledge. This provides the stable with a unique advantage over other stables in that it can not only set horses for specific campaigns but has a trainer in place who can ride and report back on a horse's progress on the track.

Richard trains a team of 40 horses in full work at any one time and is domiciled in stables within a furlong of the Morphettville race track. He believes in working closely with all horses in order to place them at the best advantage.